The motivation behind my business

Why I decided to add coconut water to my diet.

The inspiration that led to Coconut Man LA started with Dimas Mendez. Dimas is a Venice beach native as well as a long time Kriyaban meditator and health food advocate. In 1976, Dimas was suffering from indigestion, acid reflux, and depression. In order to alleviate these symptoms, Dimas began exploring different solutions and decided to add coconut water to his diet. After trying coconut water for the first time, Dimas experienced immediate relief and feelings of wellness and euphoria. He was so transformed by this experience that he decided to devote the rest of his life to the study and promotion of coconut water.

Dimas’ inner calling led him to the island of Kauai where he could live by coconut trees. On the day of his arrival in Kauai, Dimas was so excited that he decided to climb the first coconut tree he saw. Half way up the tree, Dimas began to feel his strength declining until his body completely froze. He realized that he was too tired to continue climbing up or climb down. As he looked down he thought, “Oh my god, I’m going to kill my self!” Dimas closed his eyes and imagined becoming one with the coconut tree. Immediately, his strength returned and he made it to the top and picked his first coconut.

For the next ten years, Dimas lived happily climbing coconut trees, harvesting coconuts, and even sleeping in coconut trees. It was only the desire to be closer to his parents that led him back to the California. Upon arrival, Dimas needed to find a way to reconnect with his passion and eventually found a distributor of Young Thai coconuts. He developed an innovative cutting system that allows anyone to open a coconut with their hands and with little effort. Dimas has been featured in numerous food trade shows and is affectionately known as the one and only original Coconut Man. 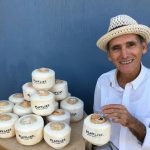 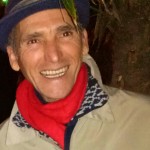 Benefits of Coconut Water
Learn about our Services & Delivery